Starting the new year traveling came as a surprise. I’ve always traveled with Luis in Winter when I was in college because we had time then, but we got super bored of traveling to countries colder than Portugal. Traveling in Winter can be a struggle for me because first of all I hate cold weather and second because it never seems to cooperate with our plans. Anyhow, we kick-started the year with the decision to spend my birthday in Israel, as the weather is only mildly cold in January. 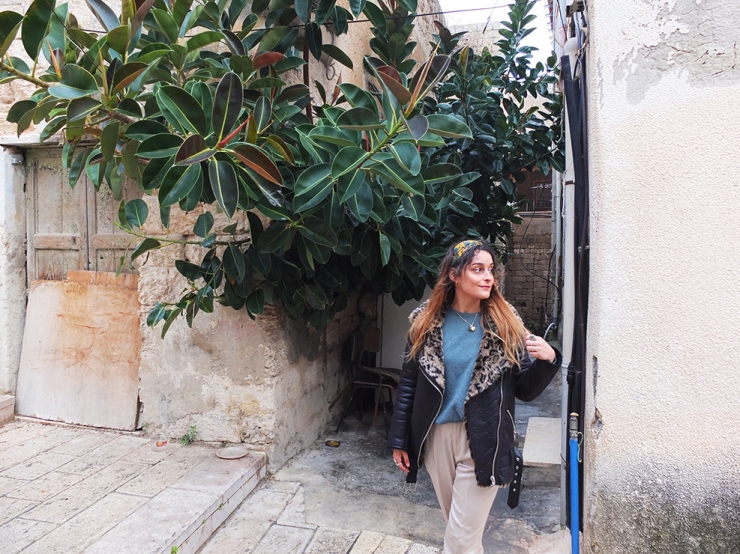 We arrived in Tel Aviv late at night and rented a car, so the next day we headed up North. We downloaded Israel map from google maps and our drive went smoothly, this system helped us driving in other countries many times before. Anyway, most of the freeway signs are written in hebrew, arabic and english. We stopped at Tel Megiddo, a village that goes back as far as 7000BC!

We decided to go East, skipping Haifa, which is on the coast, North of Tel Aviv, because it was going to rain all day over there. We opted to go to Nazareth where it rained a little as well, but we were able to hide from it under the market’s roofs. I guess that the reason why many of the stands were closed is because it’s low season. But I can assure you that it’s still wonderful to walk around those maze like markets, in the Old City. We visited Basilica of the Annunciation, where they have a lot of mosaic and tile panels that were gifts from countries all over the world! It’s really cool to see how Virgin Mary is  interpreted in so many different cultures.

After Nazareth we headed to the Sea of Galilee. (Everything sounds so biblical!) When we were getting out of Nazareth, which is on a hill we saw a mind blowing rainbow and though there were clouds, the whole place was flooded with a beautiful golden light. It was miles away from a normal cloudy grey sky.

Because Israel is a tiny country, we were able to arrive in Jerusalem by 9pm. We didn’t go to a restaurant because we went to a supermarket and bought a lot of cheap and amazing Israeli food (such as hummus and pita bread). Our hotel stood a short walk away from the Old City of Jerusalem and the next day we made our entrance through Jaffa Gate.

On many of the alleyways you’ll be able to find amazing food and pomegranate juice. By accident we came upon Zalatimo, which has a rather controversial reputation. As we were already there, we decided to try the famous mutabak. We ordered 2 coffees and a mutabak with nuts. I have to say that the pastry was incredibly delicious but paying about 11€ for the three things sounds like a ripoff. Nevertheless, I would eat it again!

Jerusalem is divided in 4 quarters: Jewish, Christian, Muslim and Armenian. And you can really see the difference when transitioning from one to the other. As I’m not muslim I couldn’t enter the walls that lead to the Dome of the Rock (on the photo above), which was really disappointing as I would have loved to see that tile work closer.

As a city that welcomes crowds of religious tourists and curious from all over the world, I was expecting to be crushed by excursion groups but that was not the case. We just walked around, sometimes entering some dark little passages that end up in patios. We never felt in danger and you can see a lot of police and military around. 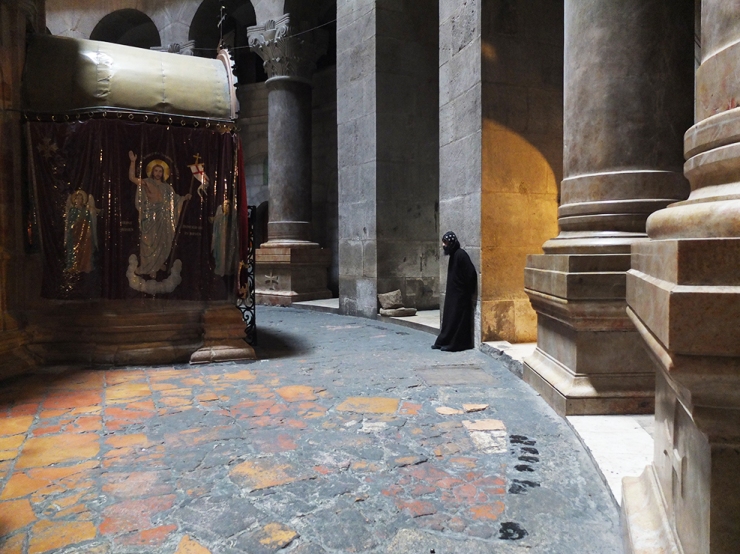 The Church of the Holy Sepulchre is a very peculiar place. It is said that Jesus was crucified there, as well as buried. It has a lot of chapels and the decor is super eccentric. There you can find people manifesting their faith in a lot of unusual ways. There was a lady that was rubbing each day of a daily appointment book on the Stone of Anointing (the place where Jesus’s body was prepared to be buried). There were also people pouring oils and spreading their new souvenirs all over, in order to bless them (fake Michael Kors bags included!).

After the Holy Sepulchre Church we visited the Western Wall. For us it was super odd, as there are not many jews in Portugal, and though I’ve lived in Antwerp for a while, which is a city with loads of them, it was truly enriching to see the way they worship god and their traditions.

I guess that one day in Jerusalem is maybe too short to visit everything, but we actually ended our visit at around 4pm, with the beautiful sight of the Mount of Olives and still had time to get to the Mahane Yehuda Market. There we bought what would be our dinner later on: fresh bread, olives, some snacks and the most amazing Labneh with olive oil and Za’atar.

As we only had 5 days to explore Israel and in between we also wanted to visit Petra, in Jordan, we had to plan our route in advance. One thing we had to consider was the weekend, which is actually on Fridays and Saturdays. During these days nothing happens and most places are closed or open only for a couple of hours.