Having watched Hart of  Dixie tv series (yes, I’m not ashamed!), I’ve since wanted to feel those hot sub tropical Summer days with the casual thunderstorm and rainfall and that was exactly what I found in old Dixieland. Our first stop in Alabama was Montgomery, home of Rosa Parks (click the link to know more about her) ❤ . To our surprise, and having arrived at dusk, the night was weirdly calm and the city rested in silence in the absence of people. We walked by the river for a while and I loved the Riverfront Tunnel with its psychedelic lights! ❤

The next day we visited Selma. Edmund Pettus Bridge is absolutely overwhelming, for all that it symbolises. I’m usually as tough as it gets, but I felt something that I really can’t explain. This bridge staged two sequencial voting rights movements, the first one called ‘Bloody Sunday’, in which peaceful and unarmed protestants that were marching from Selma to Montgomery were massively attacked by state troopers, back in 1965. To think about how much african-americans had to fight for their basic civil rights and knowing that it wasn’t that long ago gave me the chills!

In the middle of Alabama River there’s an island that was used as set for a Tim Burton movie called Big Fish (2003), which I’ve always been fond of. ‘Town of Spectre” is located in Jackson Lake Island, Millbrook. This set portrayed a once prosperous town which fell into decay, being found by Edward Bloom (the main character) many years after he’d been there for the last time. 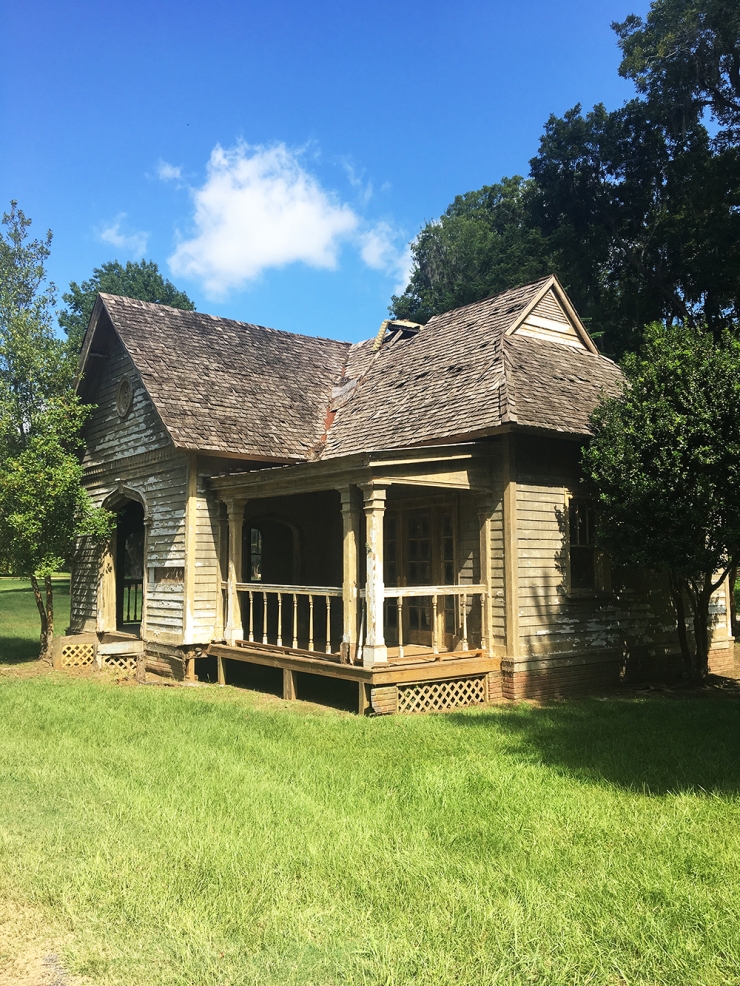 We arrived at the entrance very late. The gate was closed and the sky was already dark. We decided to snuck in and because it is an island, we figured there would be a bridge to cross. Apart from that figuring we really didn’t know what to expect. The darkness was so intense that we couldn’t see 2 meters ahead of us. After walking for a while Luis asked me if I wasn’t afraid and I said that of course I was! I didn’t want to fall down a pit-hole or into the river or have an encounter with a witch! But then he reminded me of all the wild animals that we knew that exist in Alabama and could hungrily from nowhere to attack us, for example: black bears, coyotes, alligators, snakes… As soon as I remembered that we started our way back in a super fast pace, deciding to come back early in the morning, when we would be able to see everything that surrounds us. 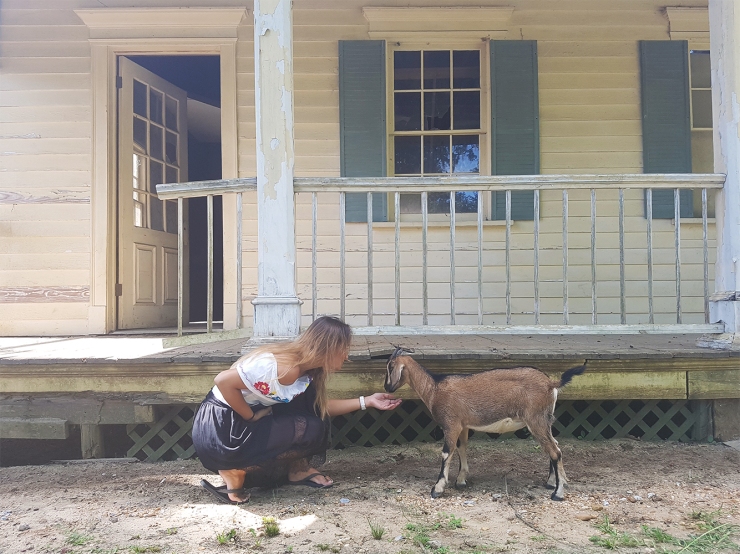 The next day, while visiting the place we were pleasantly surprised to see that the only animals that could be found during day hours in the island wore friendly goats!

We spent the rest of that day driving around and crossing the State of Mississipi in order to arrive in New Orleans, Louisiana, in time to have dinner. As soon as we arrived, one thing that made me super happy was the street name sign tiles on the sidewalks (these kind of little things make my day!). We had some Pho and went to Café du Monde to have our first beignets. I could stay there forever eating those absolutely amazing fried pastries and sipping a cold coffee and orange juice! After that we hung around and decided to have some drinks at The Spotted Cat down at Frenchmen Street. I was told by my friend Paulinha that it was the cutest jazz bar, super fun and upbeat and she was utterly right! We had a blast! The ambience and the band that was playing were what I’d always imagined and the couples and friends dancing swing and picking up people from the crowd was the cherry on top of this delicious cake! 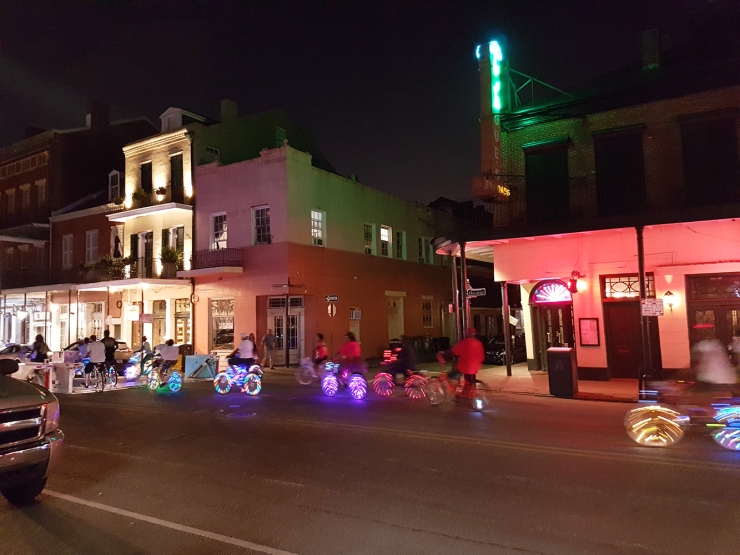 NOLA has a pretty heavy party scene and there are people making all sorts of fun things! The group on the pic above was listening to super loud music while dancing and driving their rad bikes! There are loads of bars selling this weird super colourful alcoholic slushies. And there’s people singing and playing music all around the French Quarter. 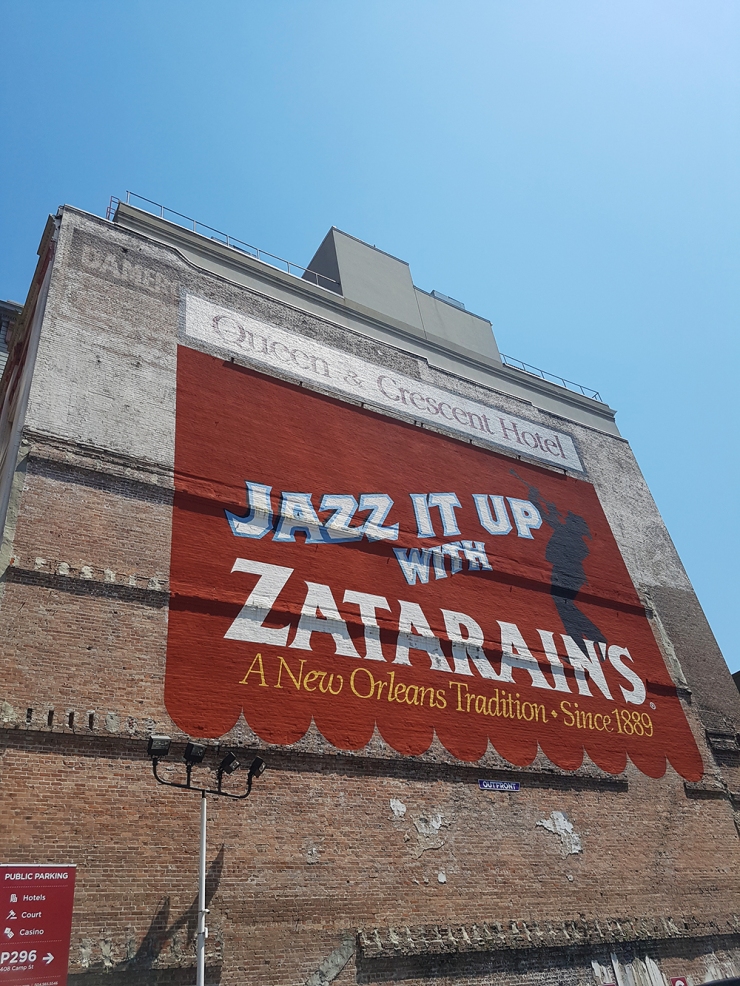 I’m so in love with the beauty all around. In the city center it’s hard to notice traces from hurricane Katrina’s devastation. All the houses, the trees and vegetation that thrive in the beautiful cast iron balconies are absolutely exquisite, most of them scattered with mardi-gras necklaces. 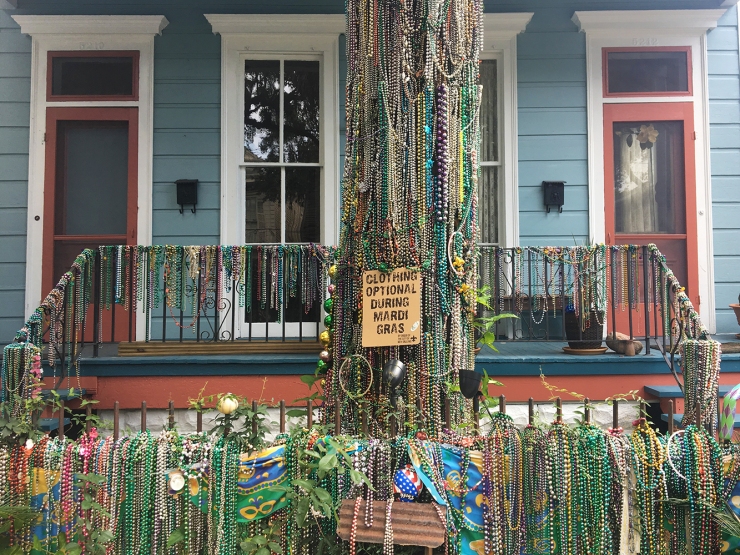 While in New Orleans, it is mandatory to try a Po-boy sandwich (they’re absolutely amazing). I had mine with fresh catfish (and loads of Tabasco sauce) at Domilise’s, a little place that has had its doors open for almost 100 years! You also can’t miss Hansen’s Sno-Bliz, which is open from spring till fall. A sno-bliz is made out of layers of fluffy shaved ice and home-made syrups poured in between. It is heaven on a cup! I would definitely encourage you to go to their website and check out all the flavours they have because the information laid around the shop is pretty confusing! Due to the whole messy communication I just told the girl to do whatever she wanted leaving out chocolate flavours, which I’m not very into. So the result were these two perfectly delightful and refreshing big cups, one with cream of coconut and spearmint and the other one with ginger and hibiscus (which was a limited time flavour). Waiting in line will definitely be worth it! ❤

At the end of our stay we went to visit the beautiful Laura Plantation, which is located right next to the Mississippi river. We’re not very into guided visits, so we skipped that, driving around instead and seeing the magnificent Oak Alley. While hitting back the road we realised we hadn’t seen no alligators yet! As the road we were driving on had a swamp running parallel to it, I focused my attention on it. I’m not sure if it was luck or fate, but I spotted one and we stopped the car ant then there was another one, just swimming calmly at sunset, coming from their hiding places in the shadows to protect themselves from the intense and hot summer sun.